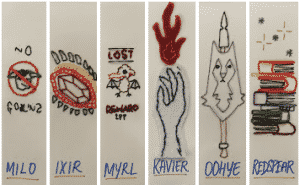 The Avengers renamed their group and now call themselves The Prevengers of Prevengers Inc, the new mining company sited in Wave Echo Cave with headquarters in the former Tresendar Manor. The new leaders of the company included:

As Gundren expected, the company brought new prosperity to Phandalin and it quickly became the largest employer in town. The first thing the company did was to upgrade all tools used by their miners (supplied by gnome-goblin technology). This gave a big boost to productivity. The company also introduced welfare programmes like a monthly All-You-Can-Drink buffet, an Arcade & Recreation Centre, and a series of Safety & Learning programmes that employees can attend. This was unheard of in this medieval world and boosted morale to an inspired level. They also improved the security and safety of the mines and HQ. Head researcher made great strides in improving the length of time weapon or armour retained their magical +1 property.

The Prevengers also pursued their own agenda.

Ixir spent most of his time working at Prevengers Inc. He continued his investigations into the Cult of the Dragon and discovered that their base of operations was in Mount Hotenow. He also learned from Sildar that Favric’s father was the informant who long ago provided critical information on the location of the kidnapped wyrmlings. He had defected from the cult and left his clan behind. Favric grew up in ostracized and in shame of his father’s defection and was driven to restore the honour of his family. Belrak agents found out that he intends to complete the ritual with the mummified remains of the wyrmlings… Sildar also confided that since his job was done in Phandalin, he intends to leave soon. He asks if Ixir would like to join the Lord’s Alliance. He agreed and was bestowed the title, “Cloak”.

Kavier disappeared for two months but returned in time to spread the word of safety amongst the employees of Prevengers Inc. He also appeared more druidy than ever. He established the SOP of placing healer’s kit in accessible locations within the mine and regularly held safety briefings. He also trained his retainers, Arthur, Lute and Saleh to use the healer’s kit. They covered his role of Chief Physician while he was away. To unwind, he often visited Anya for tea in the dreamscape.

Milo, flush with gold, spent a week carousing at Stonehill Inn. While he spent coin, he also unnerved the inn’s customers and made an enemy out of Toblen Stonehill who finally kicked him out at the end of the week. Shrugging, he decided to return to Red Larch to look up Lymmura the acolyte he gifted a nice dress. He found that she had rotated out and two new clerics have taken her place. He decided to commission a set of dresses (complete with accessories) for the new residents of the All-Faiths Shrine. One of them, a halfling priestess of the Blessed Sisters, had a whirlwind romance with Milo. They parted amicably after Milo returned to Phandalin to report to Ixir.

Once back, he decided to look up Sister Garaele and learned that she had been called to return to her order in Yartar. He decided to follow her and found her desperate for someone to help her speak to Agatha the Banshee. After promising to show him around Yartar if he went to speak with Agatha, he purchased something pretty (a large emerald necklace for 150gp) and went to Conyberry. There, she discovered the banshee’s dwelling. He politely presented the necklace and was able to ask a question of her. She disappeared after answering and he carefully stepped outside and ran for his life. Returning to Yartar, an overjoyed Sister Garaele reported to her superiors and gleefully inducted him into the secret organisation she was part of, the Harpers. He was bestowed the title, “Watcher”. As promised, she and a group of other acolytes brought him carousing around Yartar. They spent most of their time in gambling dens and, with Milo’s halfling luck, managed to win a tidy sum. Happy times didn’t last and he trudged back to Phandalin to report to Ixir again. Ixir, fed up with the lack of progress investigating the cult, sent Milo back to the Belrak Clan.

Myrl in her evil little heart found the perfect experimental subjects in the miners of Prevengers. She carefully picked and cataloged the bones in the cave and began her study of necromancy without magic. As Head of Supplies, she had a chance to spike various concoctions into the mess hall’s food and attempt to kill one or two miners for study. However, her scheme backfired on her and the potion actually made the miners even more energetic and ready to work. She spent most of her time in her secret workshop and found it boring to sit in at the regular board meetings.

Oohye, as a soldier, believed wholeheartedly in improving his weapon. What better way than to learn smithing? He found a willing teacher in the local blacksmith, Saveras Tantur, and spent apprenticed for 10 weeks. He also spent time in the basement of the Sleeping Giant keeping up his skills in pit fights. He fought and won against the drunkard Pickled Pete and a noble Galandro. He also suffered losses to a cunning moon elf Inverna and gold-craving Talon.

Redspear realised that he would need to use tinker’s tools to fix the Forge of Spells and asked Eldon to teach him. The gnome gladly agreed and he spent seven weeks in Bonesplitter workshop learning. The months passed so quickly for him as he studied the forge.

Bree and Maree also quickly established themselves in Phandalin.

Bree renovated a simple house with a garden near the Sleeping Giant. It lay somewhat away from the main road, giving it privacy. The laboratory took up most of the space and opened to the garden. In her spare time, she sold health potions, much needed by the local miners. This gave her a comfortable living.

Maree, with the princely sum Belkin gave her, went about building her golden temple dedicated to Lathander. The temple occupies the open space on the town green. Although the temple had a slight mishap with Lathander’s symbol falling off the facade, it quickly became a popular place for free gruel. She also attracted a total of seven converts, of whom six were dwarven miners and another a goblin apprentice blacksmith from the Bonesplitters. Diesa, a female dwarven miner was named head priestess (other dwarves are Brother, Delg, Audhild, Finellan, and Dain). She had plans for Raff the Bonesplitter goblin to spread Lathander’s word to his clan…

A newcomer, Rae, appeared in town at the end of the six months. She arranged a meeting with Redspear through Eldon, whom she somehow knew. Redspear discovered that she may be his half-sister and that their mother had bought a map of Conyberry in search of the Shrine of Savras. He felt that it was a lot to take in. It felt suspicious. As for Rae, Redspear being her only lead, decided to stick close to him. As they left the inn where they met, Oohye caught sight of the buxom Rae and fell in love at first sight but was rebuffed.

Kavier and Maree were both in the crowd when Oohye went down at the hands of Inverna (who had used poison to knock him unconscious). As Kavier reached for his healing kit, Maree created a flashy display of her healing powers to revive the goliath. Seething at the missed opportunity to hold yet another person’s (victim’s?) life in his hands, Kavier glares at the oblivious Maree.

Bree catches Maree on the footsteps of the temple and sought out a conversation with her. She attempts to find out how the dead can be revived but did not get satisfactory answers. Maree dimly realises that Bree is not very impressed with the conversation…

After Sildar left and Harbin Wester reverted back to being Townmaster (this time under the watchful eye of Ixir and Emmeline), reports of a white dragon trickled in to Phandalin. Further reports of orcs driven out of the mountain by the dragon was heard — which inevitably led to reports that outlying farms were being attacked. A hum of fear and uncertainty pervades Phandalin. Some, like Harbin Wester, had taken to barricading themselves in their homes, refusing to come out. New requests to warn or save different people around the region appeared on the job boards.

Emmeline went to the Prevengers to see if they can form a party to look into these threats. She also helped them to recruit possible candidates and brought them to meet at Stonehill Inn. They introduced themselves, agreed to work together and set off to the Townmaster’s Hall. There, they decided to take up the quest to help the people at Butterskull Ranch, somewhere beyond Conyberry.